In general, brides and grooms prefer to take the traditional route when choosing their wedding clothes.

However, other people have no qualms about doing things their own way. Take a look at these wild wedding dresses that will make your jaws drop. These folks clearly know how to make a statement!

When people choose a wedding dress, it looks like comfort is not the priority at all. However, this becomes more important if you are expecting a child. Many couples prefer to get married before their child is born, and this was what happened here. Honestly, it was smart of her to pick something that did not constrict her belly while she and her partner exchanged vows. We love the fact that she did care about what society had to say and cut out this part of her dress. She is a true queen in our books!

The fashion designer must have been fed up with all the brides who skipped perfume and deodorant on the wedding day. This was no longer an issue because she covered the dress with bars of soap. Not bad! 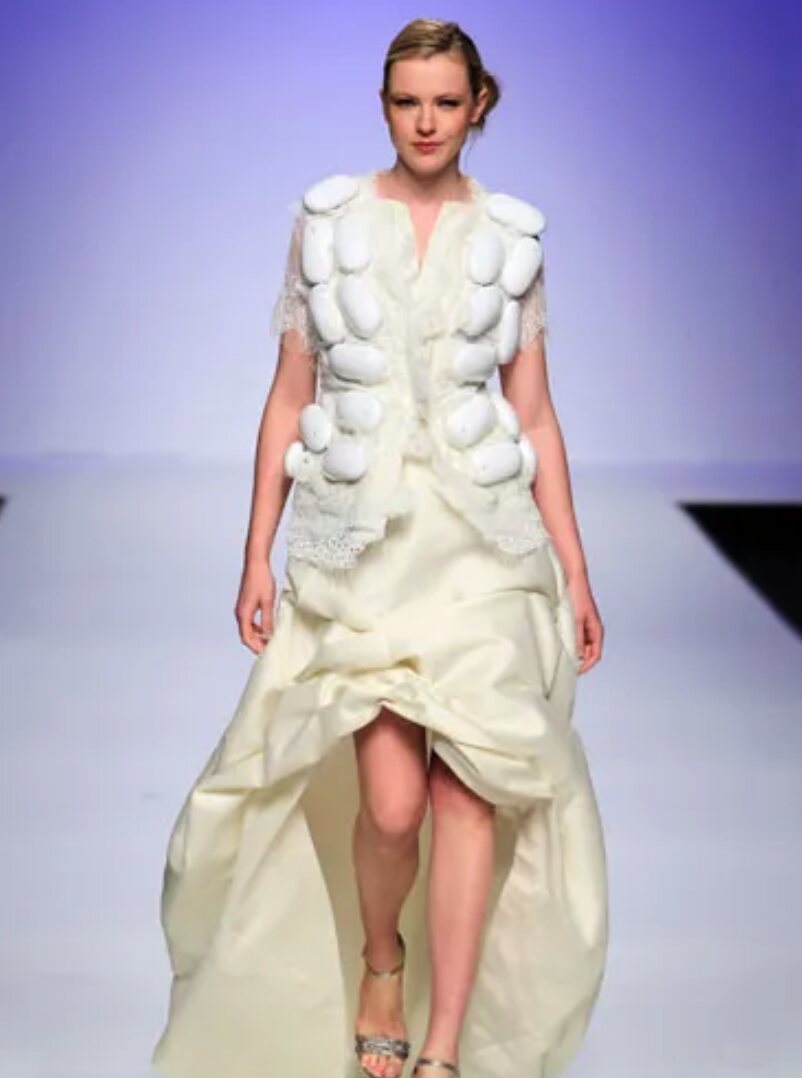 We want to know the story of this story. What on earth made this woman choose a dress that was made of balloons? It would be totally unfair if we did not talk about her balloon cape. Not only could she not sit down in the outfit, but she also had to be very careful about making contact with sharp objects. We are sure that she did not want to pop her dress! This only makes sense if her groom was a clown. 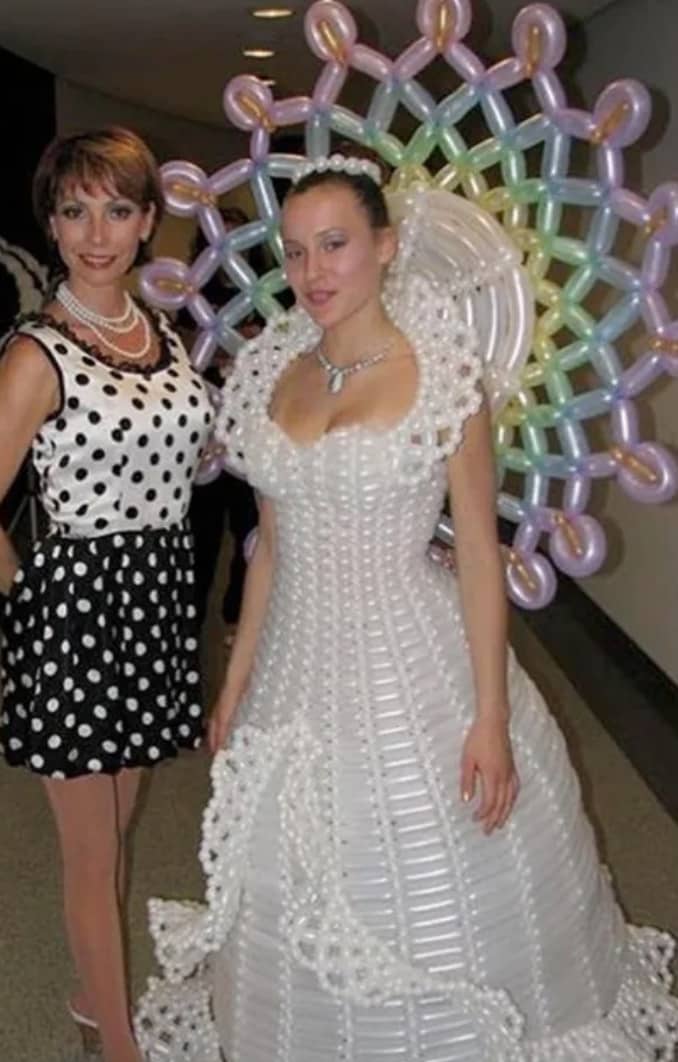 Even though most people choose white dresses for the big day, there is no rule that says you have to do the same thing. This woman picked an all-black ensemble. It is not just black, but it also had gaudy lace and a lavish train. The icing on the cake, however, would be that awkward veil. 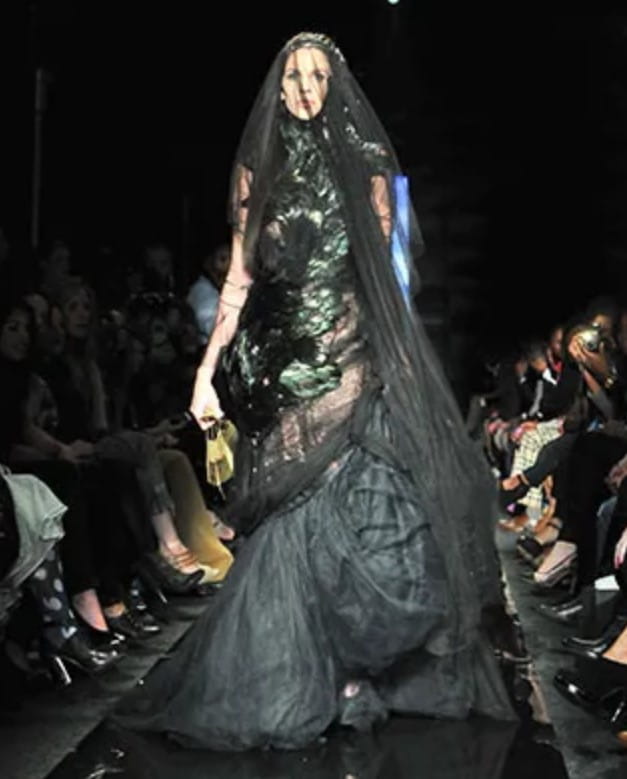 From Rags To Rags

The photo was shot in such a way that it makes the pair look like they are about to drop off the planet. This is not the weirdest part of the photo just yet, however. The groom looks like he had just realized that he was about to marry someone wearing actual rags. Even though a little bohemian is nice every once in a while, she took it too far. Maybe she had been collecting rags all her life for this crazy dress. 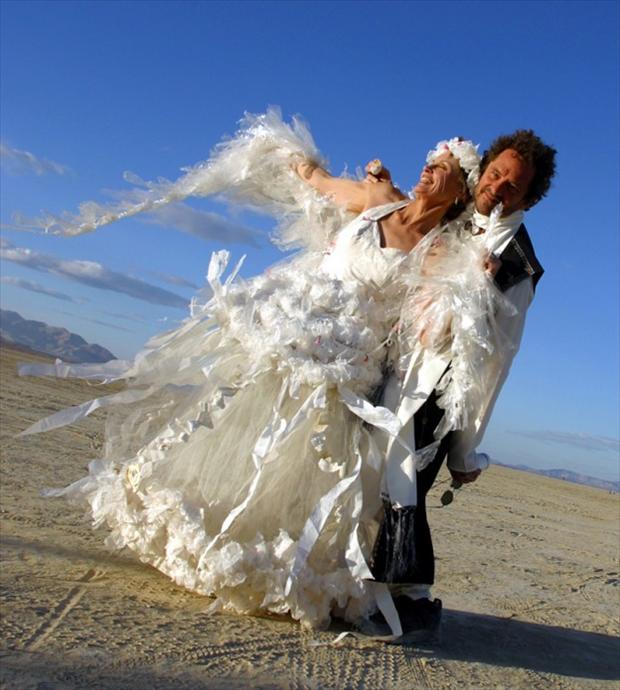 The Frillier The Better

Before you set out to look for the best wedding dress, make sure to think about what works for you. For one, you will have to choose between a fitted or loose dress. This woman was the sort of lady who liked outfits that pop. Not only did she rock the fishtail look, but she turned the outfit into a fish as well. The frills on her dress look like something that an underwater creature would have. As Dory from Finding Nemo likes to say, just keep swimming! 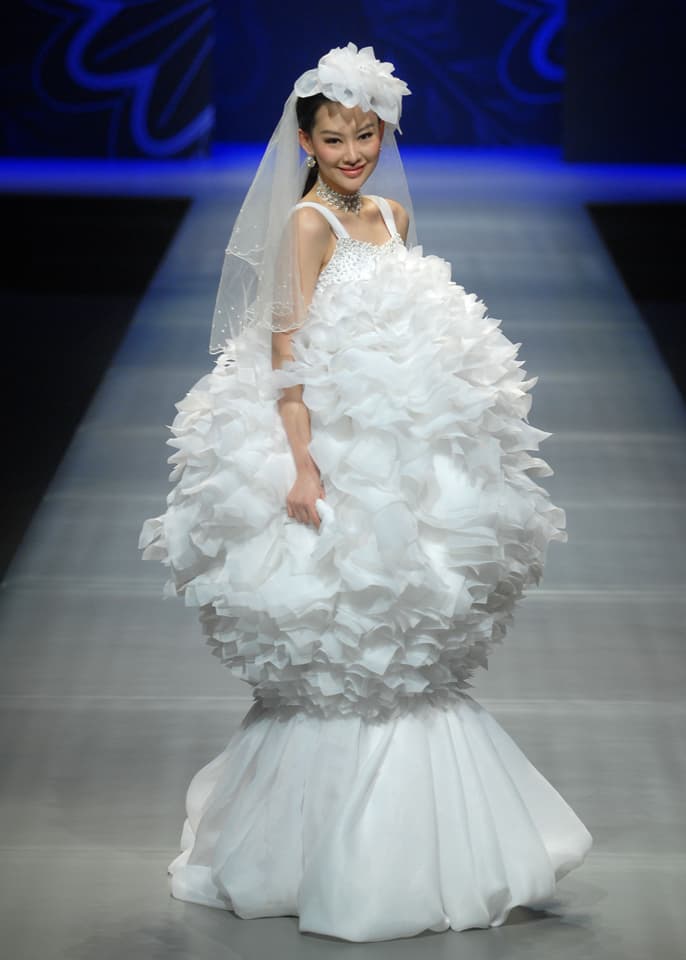 Well, this dress truly accentuates the hips… but it did so in a bad way. Even though a lot of women want to have smaller hips, this bride preferred to have hers stand out. Well, they do say that hips don’t lie! 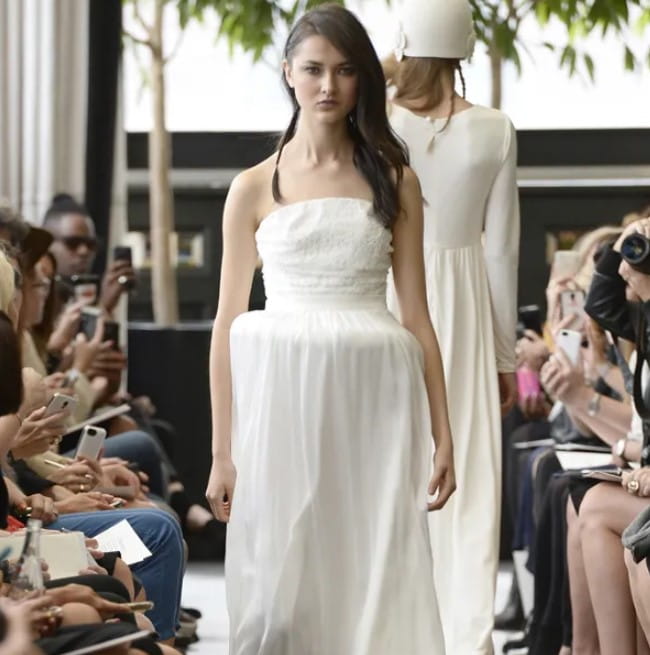 Orange Camouflage For The Outdoors

She is all smiles even if she had been wearing an outfit that not a lot of women would dare wear. The beads and spots on the dress make it one of the most daring choices on our list. If you are thinking of holding an outdoor wedding, you would be better off wearing a completely different outfit. 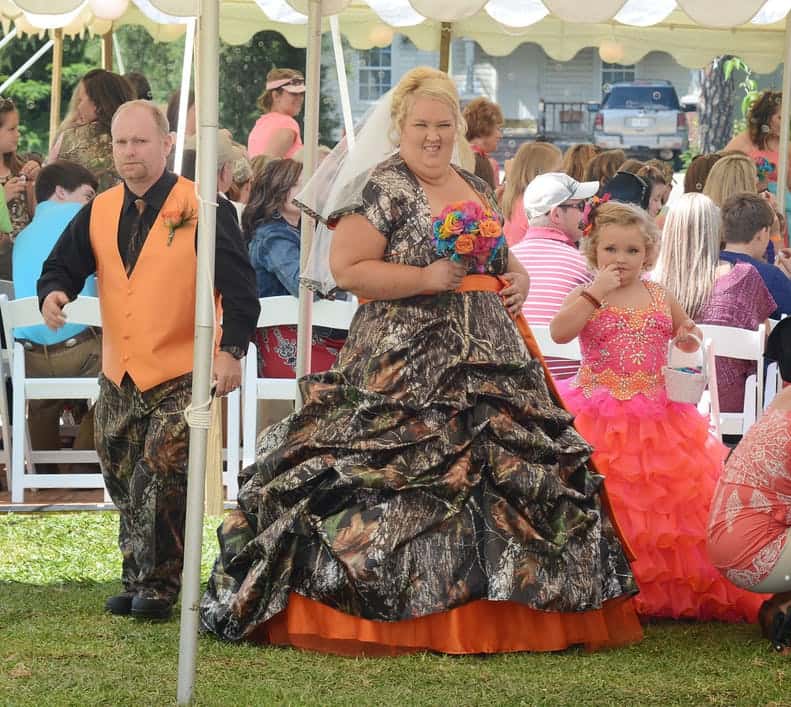 Gown Out Of Hair

As you can see, it is not all that rare for brides to forego the traditional white dress and go for something more unique. Even so, we have to admit that this dress is far too bizarre for our liking. It is a masterpiece that nobody would ever forget. After all, there is nothing more remarkable than a human hair dress! 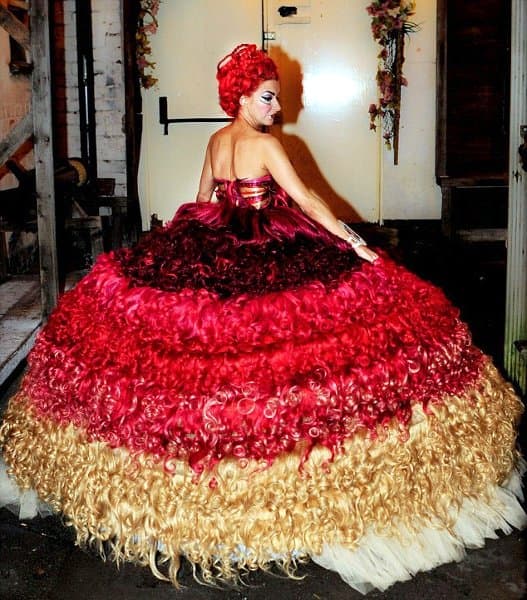 Mind you, a gangster can be a big fan of true love as well. This groom and bride wanted to have a unique and memorable wedding ceremony. We love the way they spray-painted their outfits! This was a great opportunity for them to combine street style and tradition. 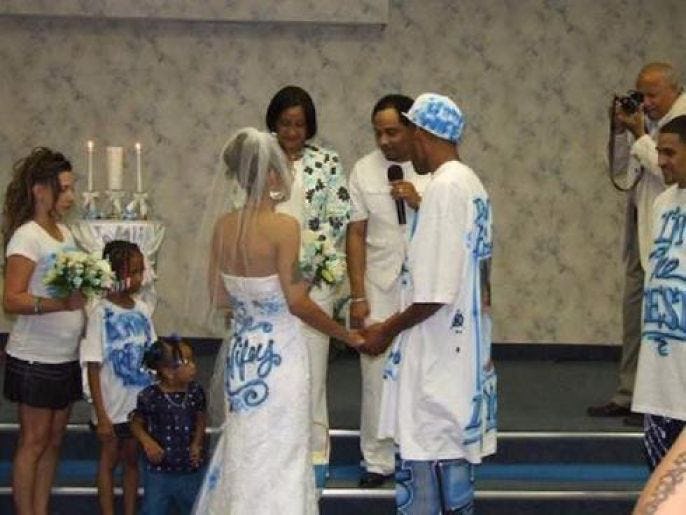 This wedding gown is so avant-garde. It took inspiration from Russian nesting dolls. The dress was made in 1965, which is amazing. We have no idea how long it took to finish it. The stitching is so impressive! 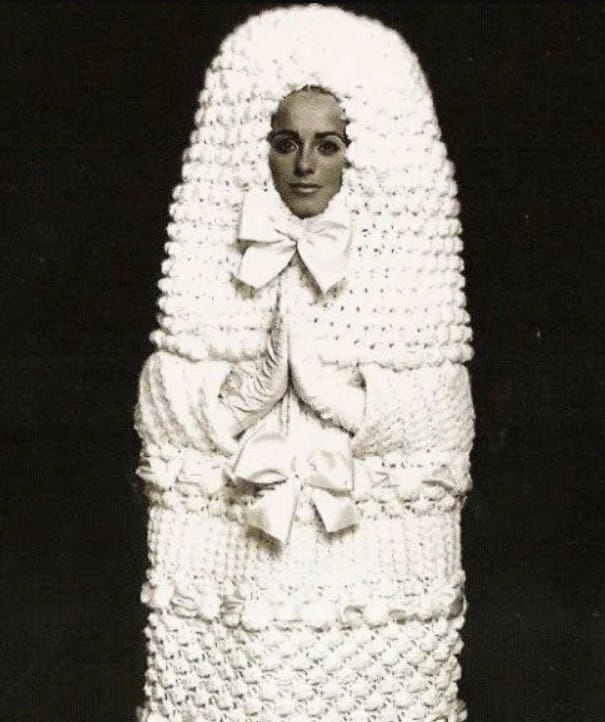 This gown boasts every single style that you can imagine. There are ruffles in the shower camp, a lampshade to cover her shoulders, and tissue paper on the bottom. We do not know what the designers had in mind when they made this one, but we have to say that we do not particularly like this one. Next! 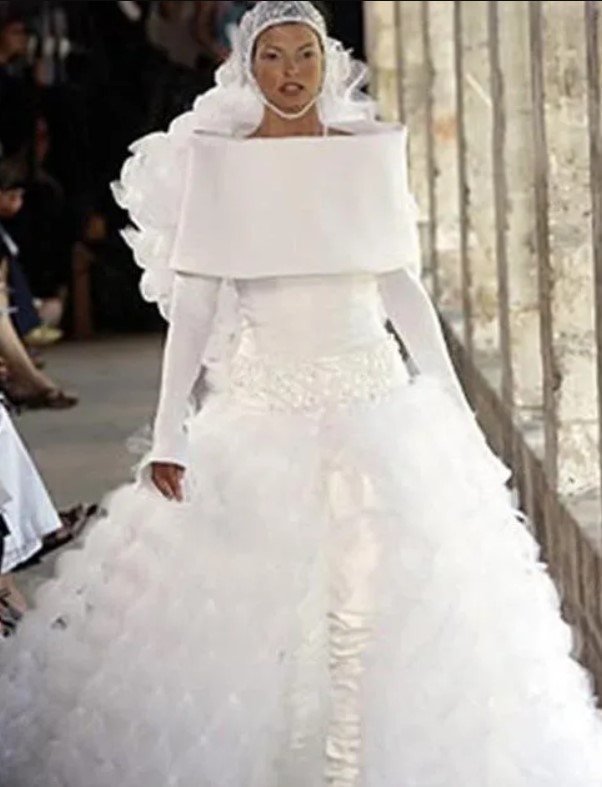 We are sure that you are no longer shocked by the existence of all these weird and wild wedding gowns. If you have children of your own, it is only natural to want them to play a part in the ceremony. However, this mom went too far. There is a tasteful way to add personal touches to your wedding dress, but we do not think that it is appropriate to pick a diaper for the material. Even though the kids look delighted in this photo, we just do not get the appeal of the dress whatsoever. 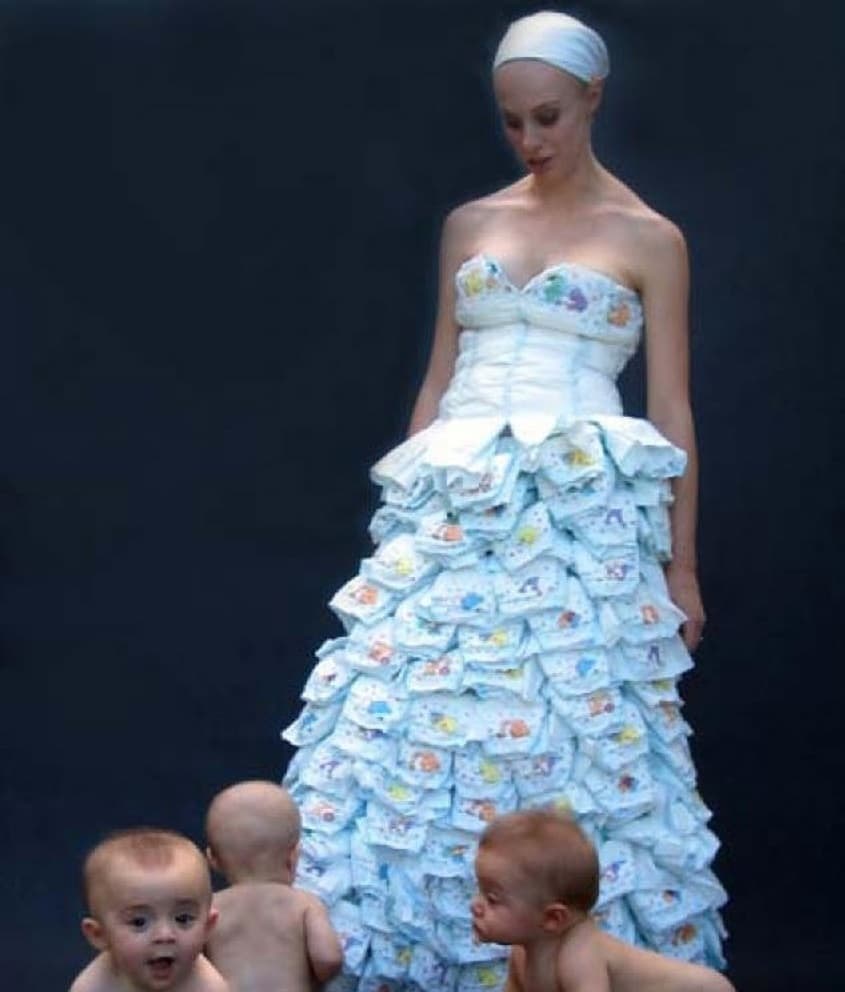 Too Lit To Get Married

By now, you must be more than aware of the fact that this is a list dedicated to the brides and grooms who ended up choosing unorthodox wedding outfits. This woman showed off her fiery take on wedding gowns. She still stuck a white base, but she jazzed things up by adding flames to it. She looks hot! 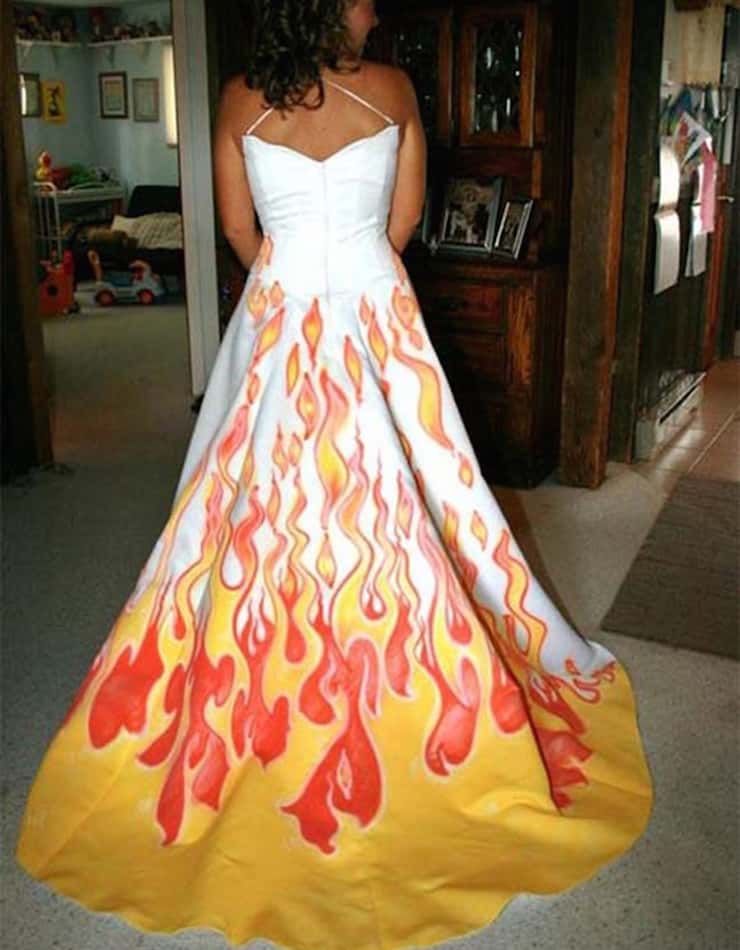 There is not a single person on the planet who will say that Ferrero Rocher does not taste good. This lady is clearly passionate about her favorite chocolate. As a matter of fact, she loved it so much that she wanted to use it on her big day. Well, she made for a very sweet sight during the wedding day. 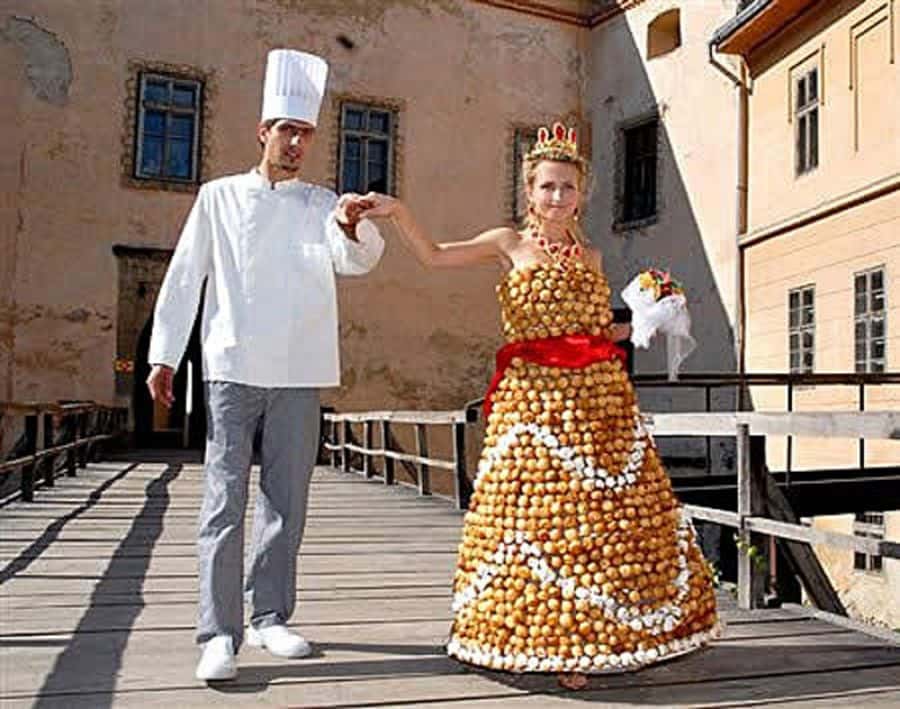 Kiss A Man: 6 Ways To To Make Him Obsessed With You

Here’s What Really Happens To Your Poop In An Airplane Toilet !

Dumb People Who Are Absolutely Doing It Wrong